Many of you seized the opportunity to learn more about PROJECT: VetRelief at The American Legion, Department of Florida Annual Department Convention…thanks for joining us!

If you missed the chance to participate in training, don’t worry!  Additional classes will be offered at Fall Conference.  Until then, feel free to ORDER INFORMATIONAL MATERIAL and stay tuned for more details.

This year we launched our Recognition Program to the Legion Family members for their generous contributions to Florida’s service members and their families.  THANK YOU all for your support and for joining us as we fight the good fight!

The Sons of The American Legion brought in an impressive total of $7,850.  And Squadron 283 received the first ever Meritorious Service Award for their contribution of $6,000!  Thank You…

American Legion Posts raised a total of $3,795 through individual post donations and a collective contribution made from the annual Southwest Ball.  Thank you…

American Legion Riders have done a great job spreading the word about PROJECT: VetRelief across the state and collectively raised $3,000.  Thank you…

WE STILL NEED YOUR HELP!

In the span of just one year PROJECT: VetRelief has laid a lot of groundwork.  We have also experienced a tremendous influx of requests for Emergency Support, going from an average of 10 cases to 25 cases per day.  And we are still only able to facilitate about 15% of requests received due to lack of funds.  In order to meet the existing and future needs of our service members and their families, we need your help.  LEARN MORE.

To better support our service members and their families, the Legion made a strategic decision one year ago to separate 3 existing service areas: Emergency Assistance, Benefits Support, and Community Engagement, into one entity, forming the newest program of the American Legion, Department of Florida – PROJECT: VetRelief.  Essentially, this allows us to enhance services, facilitate program growth, and better raise awareness and funds.  LEARN MORE

During The Sons of The American Legion’s General Session the PROJECT: VetRelief team was greeted with an overwhelming welcome, given Distinguished Guest ribbons, and received additional donations totaling nearly $17,000!  We appreciate how you have embraced our program and we look forward to working together to serve those who have given so much. 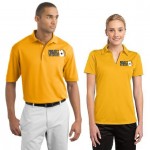 Didn’t have the chance to purchase the PROJECT: VetRelief Polo at Convention?  That’s ok; we still have some available! The highly coveted gold polo is yours for just $35.  Or, pick up our exclusive PROJECT: VetRelief hat for $15. PLACE YOUR ORDER TODAY!

Thank you to everyone who signed up for our Newsletter during this year’s Convention.  Congratulations to Cynthia Johnson, winner of the highly coveted PROJECT: VetRelief golden polo!

We were so pleased to be joined by Mr. Bob James, the recipient of 2014/2015 Humanitarian Award, during the American Legion, Department of Florida’s General Session on Friday June 26, 2015. Mr. James is dedicated to supporting veterans, as a PROJECT: VetRelief board member, through fundraising, and the hiring of veterans.

Bob has been an inspiration to PROJECT: VetRelief and on Friday he was able to share with Legionnaires the results of our recognition program, launched just last year.  Thank You Bob and Rita! 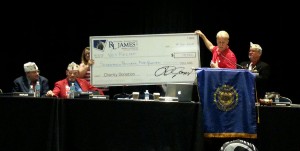